Joined Sep 6, 2019
·
392 Posts
Amazing how some would just allow a shop to take a new car apart, and have no idea what happens to the safety performance/modify the body.
E

Maverick787 said:
Amazing how some would just allow a shop to take a new car apart, and have no idea what happens to the safety performance/modify the body.
Click to expand...

Yes. But good for a laugh at cars and coffee!
E 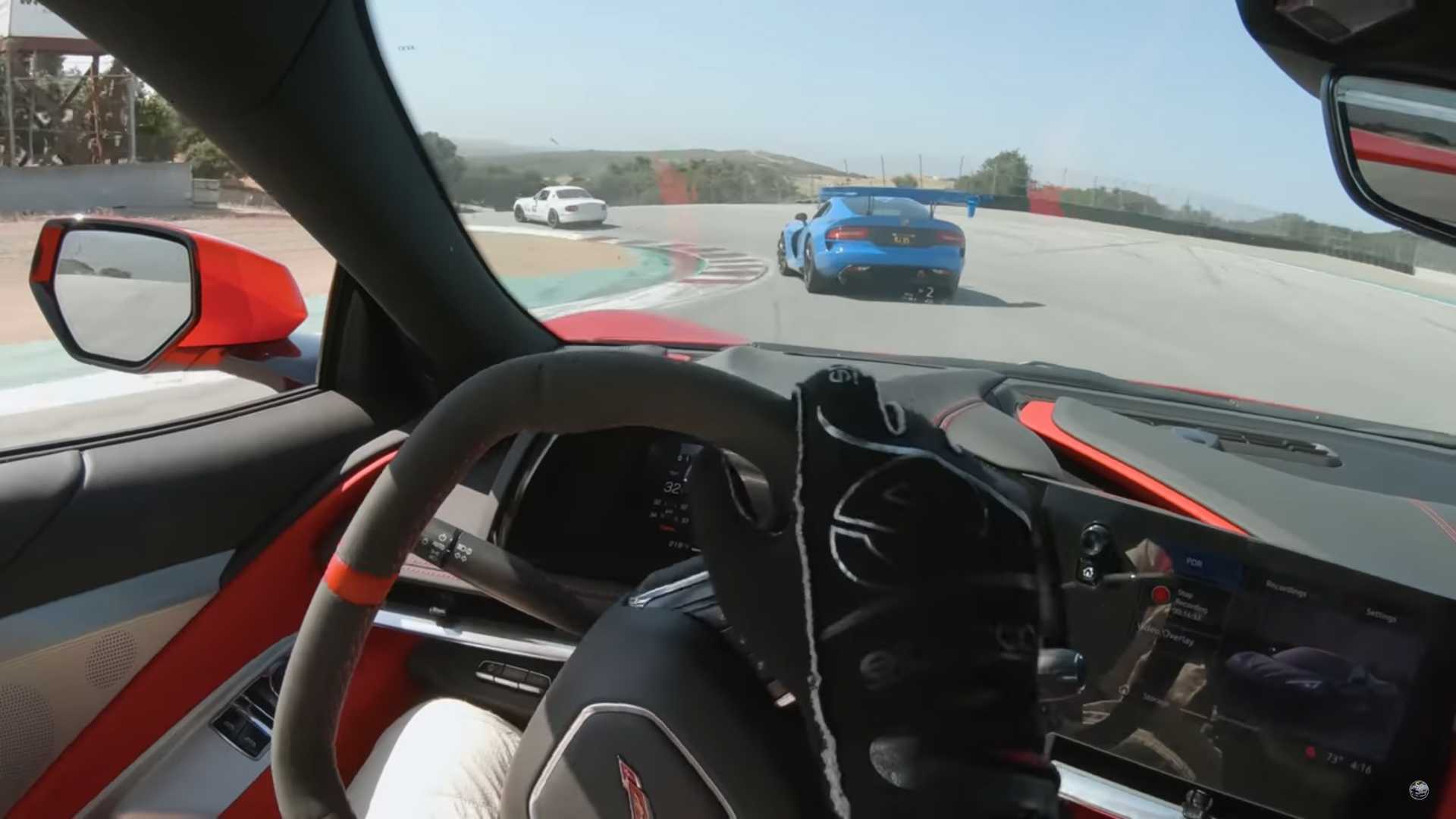 This open track day video takes us inside a 2020 Corvette turning laps at Laguna Seca, chasing a Dodge Viper ACR with a Porsche 911 GT3 in pursuit.

Joined Jun 29, 2013
·
2,543 Posts
Took my C8 to the track last week. It was fun. Very competent on track lots of grip, easy to slide, decent in the wet too (was completely dry until later In the day) and a great car to drive to/from the track as well. Nowhere near as fast as the C7 ZR-1 but I imagine give the C8 its power, downforce and tires and it will be incredible on track.

No match for a McLaren but would eat 911s all day long.
D

p2164 said:
My son and I put deposits on the C8 3 years ago and got our cars #958 and #1706 last month, for me it was just not the Mclaren so I sold it and purchased another MP4 last weekend. My son is very happy with his and he said he was going to keep it. The back of the car is huge and it doesn't have the Mclaren performance I don't care what the youtubers say. View attachment 202017 View attachment 202018
Click to expand...

Glad to hear I won't get my hopes up then for when mine shows up maybe once they get the ZO6 out it'll feel as good as a 570s but then it's still going to be a heavy Pig.
T

TougeSpirit said:
I can't wait to see what the 765LT will do and what gap it and the C8 will have
Click to expand...

There in a total different League totally
M

TougeSpirit said:
I can't wait to see what the 765LT will do and what gap it and the C8 will have
Click to expand...

But money doesn’t tell the whole story. The McLaren will always be a few hundred pounds lighter. It will have better steering, brakes and suspension. It will have a classier, less cluttered, interior. It will have nicer seats. It will be smaller and easier to navigate. It will have vastly superior outward visibility. It will have a better stereo. It will have crappier gadgetry and lack several of the cool things the Corvette has like: heads up display, removable top, two trunks, Apple CarPlay, cooled seats, heated steering wheel, free performance data recorder, valet mode, actual buttons to control the HVAC, an app to communicate with the car, OnStar assistance, and a digital rearview camera.

If anything the Corvette is more of a GT car than the McLaren which is more of a super car. Anyone who can afford a McLaren can likely also afford a C8 as a companion car. If doing so I’d recommend the convertible version due to the fact that the folding hard top doesn’t reduce the cargo capacity whereas the standard removable top in the coupe eats most of the rear trunk space.
T

Joined Mar 24, 2012
·
2,139 Posts
I think tire will make a huge difference on the 765LT. It will be interesting to see what the shorter gearing does. If the car has the traction, that could be a serious change as well. Don't know what McLaren is doing, but they should be sending out press cars left and right. Ferrari hit it out of the park with the F8 and SF90 reviews this week
L

Joined Jan 29, 2017
·
442 Posts
I still can’t get over the looks of the C8. It’s in the uncanny valley for me. So close to being great, but just “off” enough in design that I really don’t like it. I’m hoping some subtle changes in the Z06 and ZR1 can change that. Those cars are going to be some serious performance for the money.

LRHunter said:
I still can’t get over the looks of the C8. It’s in the uncanny valley for me. So close to being great, but just “off” enough in design that I really don’t like it. I’m hoping some subtle changes in the Z06 and ZR1 can change that. Those cars are going to be some serious performance for the money.
Click to expand...

Same here. I have owned multiple Vettes over the years and always loved them and I'm excited for the c8 but at least on photos and videos at least the front looks really awkward. Like a la ferrari kitcar shell gone wrong...
U

Joined Aug 25, 2016
·
96 Posts
I live near the GM proving grounds. So I see these pretty often. I think uncanny valley is the best description. They look cool from a distance and look like a super car, but when it gets close it just looks a little funny. I still generally like it, but I think they were restricted by having to keep the company design language. The rear is just a little too big, likely because they needed to fit golf clubs. I don't appreciate the stock rear wing but they have another one that's a little higher and looks much better.
E

dvandentop said:
got mine last week doing road trip this weekend will compare to 570s spider
Click to expand...

mine is a convertible on both as well so will be good compare
can tell you know even with exhaust flaps open so far exhaust isn't good compared to 570 titanium factory exhaust.

haven't finished break-in yet though

Joined Jan 28, 2018
·
70 Posts
I've had mine for almost two weeks now. I'm well past the break-in and enjoy the car. It's not as fast or exciting as my 12c. But, it's a very good, comfortable and fast daily driver. I appreciate the fit and finish which is exceptional in my 3lt. The simple fact is that it's an $85000 car compared to my $311000 McLaren. It is good but not the same as the McLaren. I am very happy with the car though!
E

Joined Apr 25, 2015
·
6,441 Posts
Hear the 2023 Chevrolet Corvette Z06's Ferrari-Style V-8 Scream
It's official: The track-ready C8 Corvette is coming, and it's getting a flat-plane–crankshaft V-8.
Alexander StoklosaAuthorManufacturerPhotographer
Jul 19, 2021
After years of fervently devouring every spy photo, creating our own renderings, and piecing together hush-hush early information about the 2023 Chevrolet Corvette Z06, the track-ready Vette is nigh. Chevy has confirmed the new high-performance C8 Corvette will appear this fall (though it may not actually go on sale for a while). To kick your anticipation into high gear, it also released a video of the Z06's new logo set to the sweet, furious music of its new V-8 engine revving wildly.
Take a listen for yourself in the clip above. Anything stick out? Is it that piercing shriek as the V-8 revs higher and higher, seemingly never running out of breath? That, people, is essentially aural proof that the Corvette Z06 is getting a special V-8 engine with a flat-plane crankshaft. This neat little trick helps Ferrari's V-8s rev to the moon, while also delivering that signature—and exotic—wail.

As we've reported on for some time, the noise you hear in the video above emanates from a 5.5-liter V-8 with twin camshafts operating the valves, instead of the pushrods that have actuated valves in Corvettes forever. This engine is much like the V-8 of the same displacement used by the Corvette C8.R racecars, only it'll make more power because it won't be restricted by racing rules to a mere 500 hp. Instead, the Z06 will get over 600—likely 615 to 625 hp—although the Z06's torque output is expected to be similar to the C8.R's 480 lb-ft.


SEE ALL 39 PHOTOS
Of course, the Z06's saucy new engine will be joined by a hardcore suspension setup, unique styling, and available carbon-fiber wheels and carbon-ceramic brake rotors. Sticker tires and extra aerodynamic accoutrements will also be part of the deal, all geared toward making the C8 Z06 as track-capable as possible. Along with all of this hardware, the Z06 will also feature a slightly new logo (pictured above), with a more stylized "Z" that matches the Z button on the current non-Z06 Corvette's steering wheel. That button activates custom performance settings all at once, essentially calling up a specially tailored driving mode, so it's neat that Chevy is linking the letter to performance and the Z06 brand.

The 2023 Chevrolet Corvette Z06 Is Gonna Be a Screamer

It's official: the Z06 is coming, and it's packing a flat-plane crankshaft.

Joined Jan 29, 2017
·
442 Posts
If it actually sounds like that it will be amazing. Crazy that the new Corvette may sound more like a Ferrari than a Ferrari.
D